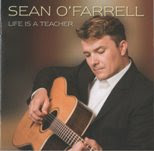 Good news for Sean O'Farrell fans, who will remember his visits to Alloa & Stirling, about 12 years ago. Sean retired from the scene, but now he's back with a new album, "Life Is A Teacher", on the Rosette label. The album opens with "No One Holds The Door Back", a duet with Daniel O'Donnell.
# posted by Stewart @ 11:24 PM 0 Comments

Forthcoming Forth Valley Country club nights include The San Quentin C&W Club meeting this Friday, August 3rd at the usual Polmont Golf Club venue in Maddison. On stage will be linedance faves Toe The Line.
A few miles away English visitors Speed Limit will be playing for the No Angels girls in Boness Town Hall, on the same night.
The next Prairie Star meeting will be in Alloa's weirs Club on Satuday,18th, when Springfield will be on stage.

Prairie Star off on cruise 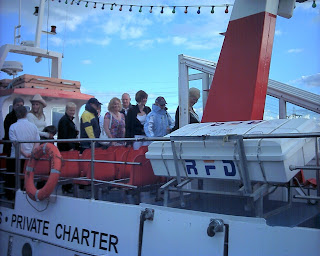 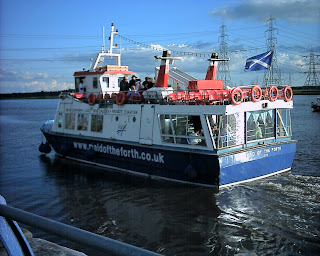 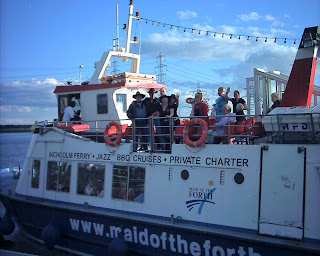 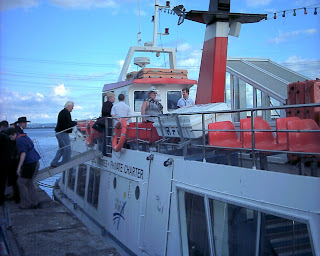 It's a lovely Sunday night and Alloa'a Prairie Star C&W Club is off on it's cruise up the Forth from Alloa harbour. The 90 Country fans are enjoying music from Country Blues aboard the Maid Of The Forth.


Enjoy these exclusive Scotcountry pics of the departure from Alloa.
# posted by Stewart @ 8:42 PM 0 Comments

The Sunday Post this week ran a whole page article on Johnny Reid, the current Canadian Country Music Rising Star, who was born in Lanarkshire. The article suggested Johnny was totally unknown over here, but, of course, was a familiar name to listeners to Central FM's Country Gold, before it was axed in 2005.

Glasgow to get Celtic radio station

OFCOM, the UK radio regulator, today awarded a community radio licence to Celtic Music Radio. The station will broadcast across Glasgow on an AM frequency to be announced later. Celtic Music Radio has broadcast for the duration of the city's Celtic Connections Festival for the last 2 years, where programmes included a "Celtic Country" show, presented by stewart Fenwick.
OFCOM also awarded licences to stations in Dunoon, Barrhead, Stonehaven & Newton st.Boswell's, alongside earlier announcements for Queensferry and Dumfries.

Renowned saxophonist Boots Randolph has died after suffering a cerebral haemorrhage on June 25, according to publicist and family friend Betty Hofer.
Randolph, who was 80 and whose signature tune was his self-written "Yakety Sax," a 1963 hit, died at Skyline Medical Centre in Nashville.
Born Homer Louis Randolph in Paducah, Kentucky, he moved to Nashville in the 1950s, where he established himself as one of the top session players in the business.
He recorded more than 40 albums and toured for 30 years, playing nightclubs with fellow instrumentalists Chet Atkins and Floyd Cramer.
Randolph was the first to play sax on Elvis Presley's recordings, and contributed to eight of the singer's movie soundtracks.
He also played for such stars as Johnny Cash and Pete Fountain. His sax work was a standout on Roy Orbison's "Oh, Pretty Woman" and Brenda Lee's "Rockin' Round the Christmas Tree."
His own albums were recorded on the Monument label.
In 1966 his sax playing earned him a gold record for his recording of "The Shadow of Your Smile" with the Knightbridge Strings. His most recent solo album, a collection of jazz and pop standards called "A Whole New Ballgame," came out in June.
He regularly played at his self titled club on Nashville's Printers alley.

Doug Supernaw was committed to a mental institution on Monday (July 2). Supernaw was ordered by a judge to undergo a psychiatric evaluation after making several unusual claims in court on April 3 in Bryan, Texas. He had been in court to answer to a misdemeanor charge for avoiding arrest after a confrontation with a police officer. In recent years, he has been charged twice for marijuana possession. His hits include "Reno" and "I Don't Call Him Daddy."

Australian Jamie O'Neal has left the roster of Capitol Nashville. She released one album, Brave, on the label in 2005 and notched a Top 10 hit with "Somebody's Hero." A new single, titled "God Don't Make Mistakes," was released earlier this year but peaked at No. 47. She released Shiver on Mercury Nashville in 2000, which brought her two No. 1 hits, "There Is No Arizona" and "When I Think About Angels.". Jamie visited Scotland on the first CMA sponsored "New From Nashvile" tour, but failed to perform due to illness.

Nashville radio station WSM will be the subject of a historical book to be published in November by the University of Illinois Press. Written by journalist Craig Havighurst, Air Castle of the South: WSM and the Making of Music City explains how the country radio station transformed Nashville into a city known for music and entertainment. Founded by the National Life and Accident Insurance Company on 1925, the station is best known for broadcasting the Grand Ole Opry